Sicily, eternal triangle of intensity, excess and carnal beauty, sits square at the crossroads of Europe and Africa. Only 4 km separate it from the toe of the big boot, everpoised for a smart kick, but these 4 km have given the island enough history, customs and personality for an entire continent.

"The mythic garden of Persephone, an Islamic paradise on earth, the fairy-tale Norman kingdom..."
- Dana Facaros

Although they are the Italian of the Italians, as Barzini writes, Sicilians are also the least, the heirs of the ancient Greeks, Carthaginians, Arabs and Normans. Spain, Naples and Rome have ruled it from afar, but never engaged its heart; Sicilians are Latins only by adoption.

Sicily is a deep place, often sombre, ambiguos, feverish, terrible and fascinating; Yet when Sicily’s destiny has been in the hands of people who cared for it, the island has been the mythic garden of Persephone, an Islamic paradise on earth, the fairy-tale Norman kingdom, more splendid and sophisticated than any in early Middle-Ages. More often the island has been raped by faraway rulers who squeezed out every ounce of wealth and beauty: paradise turns into violent poverty, a fairy tale gone underground and twisted, its hope warped into despair. The Sicilian language is the only one in Europe without a future tense.

"Throughout the history of the human race no land and no people have suffered just as terrible for slavery , conquests and oppression abroad, and no one he has struggled so much indomitable for emancipation as Sicily and Sicilians."
- Karl Marx and Friedrich Engels 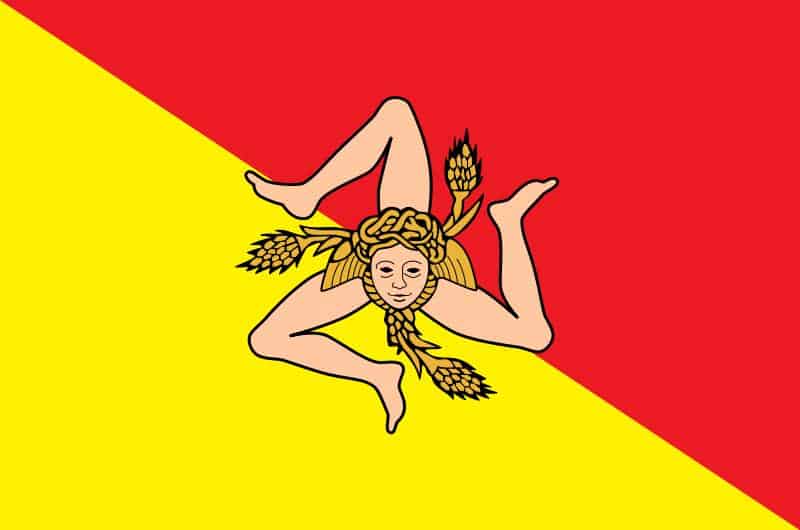 The word Trinacria means triangle and refers to the shape of the island of Sicily (“Sicilia” in Italian), the largest island in the Mediterranean. The island of Sicily was known as Trinacrium by the Romans, meaning “star with three points.” The Trinacria symbol is the head of Medusa (a gorgon with a head of snakes), surrounded by three bent running legs, and three stalks of wheat. Due to the island's distinct triangular shape, the symbol has also been adopted by the Sicilian government and is located on the center of Sicily's flag. The Trinacria's shape is often referred to as a triskelion; this shape can be found in many places among the general Mediterranean Basin region and in many European countries like France,Sicily, Crete, Greece, the North African coast, and the Isle of Man. The triskelions found in these locations have all dated back to after the eighth century BC.